The world of real-time visual effects is growing rapidly—and not just in films. Check out some of the spooky monstrosities that Ncam’s camera tracking tech has helped bring to life across industries, from Korean horror-dramas to NFL sports.

Adding Protein (Monster) to Your Diet: “Sweet Home”
Netflix’s 2020 apocalyptic horror series Sweet Home, based on the popular Webtoon, made its mark as the first South Korean series to enter Netflix’s Top 10 in the United States. The show’s production was also the first in Korea to use ICVFX, combining Unreal Engine, Ncam real-time tracking, and Xsens motion capture to bring the monsters to life on set.

“There was no way to physically bring the protein monster to the set, so we used virtual production to place the monster and his movements directly onto the monitor in real time as we shot. We were the first in Korea to use Ncam, which allowed us to do this,” said Lee Byeong-ju, VFX Supervisor.

Clash of the Mutants: “Rampage”
Based on an arcade video game series, Rampage stars Dwayne ‘The Rock’ Johnson and tells the story of a primatologist and a geneticist who team up to stop three mutated animals from destroying Chicago. The film grossed $428 million worldwide, and became the best-reviewed live-action video game film in the history of Rotten Tomatoes (until Pokémon Detective Pikachu came along). On set, Ncam was used to demonstrate the scale of the mutated animals in real time. This gave the VFX team, camera crew, and director a proper perspective of where the camera needed to be to capture the genetically-modified creatures.

“We were able to use the system to correct differences between the real world and the one created by the animators, [like] when the monsters would need to be shifted so they were no longer halfway inside buildings,” said Robert Martinez, Ncam technician.

Beasts on the Field: Zombies in the NFL
Film productions aren’t the only ones that get to have fun with monster madness on set. Fox Sports used virtual production tech, including Ncam real-time camera tracking, to create AR monsters out of NFL players during a Halloween airing of America’s Pregame. The team at Fox started using Ncam in July 2013 to enhance their graphics and studio environments, with the camera tracking tech offering a new level of flexibility.

“We provide production with an augmented reality tool kit and they utilize Ncam for the tracking… which enables us to provide a set of tools for these studio shows to tell stories in unique ways,” said Zac Fields, VP of graphics & technology for Fox Sports.

Battle of the Baseball: 2019 WBSC Premier12
At the 2019 WBSC Premier12, an international baseball championship featuring the 12 highest-ranked national teams in the world, GETOP used Ncam real-time camera tracking to bring the event’s colossal monster mascots to life. Thanks to Ncam’s precise tracking, GETOP was able to capture the audience’s attention in person and online, to a potential global viewership of over 253 million households. 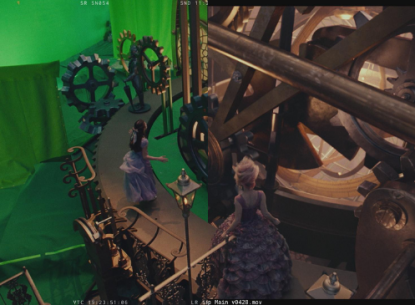